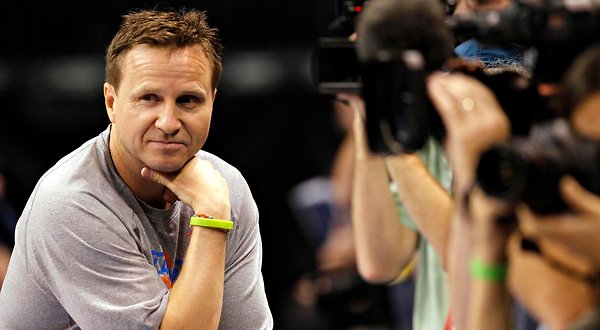 For the Monday Oklahoman, I wrote about Kendrick Perkins and his Celtic ties. You can read that column here.

I also had a conversation with injured Boston star Rajon Rondo, who isn’t giving interviews but agreed to chat about his old pal Perk.

And one of the things I asked him is how Perkins likes it in Oklahoma City.

“He’s happy where he is,” Rondo said. “He likes the organization, he loves Coach Brooks.”

That’s something we forget. How much of an impact Scotty Brooks has his on his players.

Coaching in the NBA requires many things. Strategy. Psychology. An eye for talent. A feel for the game.

Brooks’ admission that he ran the opening play of the game for Perkins was an example of that.

No coach in his right mind would ever run a play for Gran Torino. First off, it’s not likely to work, so why would you?

But even if it did work, it might entice Perkins to keep shooting, which is never a good idea.

No mind. Brooks ran a play for Perk as homage to his Boston ties.

In the same way that we all love working for bosses who show us consideration on a variety of fronts, Brooks’ play was a small token that Perkins won’t forget.

Ironically, in the building Sunday night was Brooks’ predecessor, P.J. Carlesimo, filling in on the Celtic broadcast.

Carlesimo clearly is an excellent basketball coach. But he never connected with his players during one year in Seattle (Durant’s rookie year) and 13 games with the Thunder. Carlesimo was fired after a 1-12 start in November 2008. Brooks took over, and the Thunder has been on a rise ever since.

Part of that is because his players play for him. They’ll go to the mat for their coach. That’s always a good place to start in building a team.