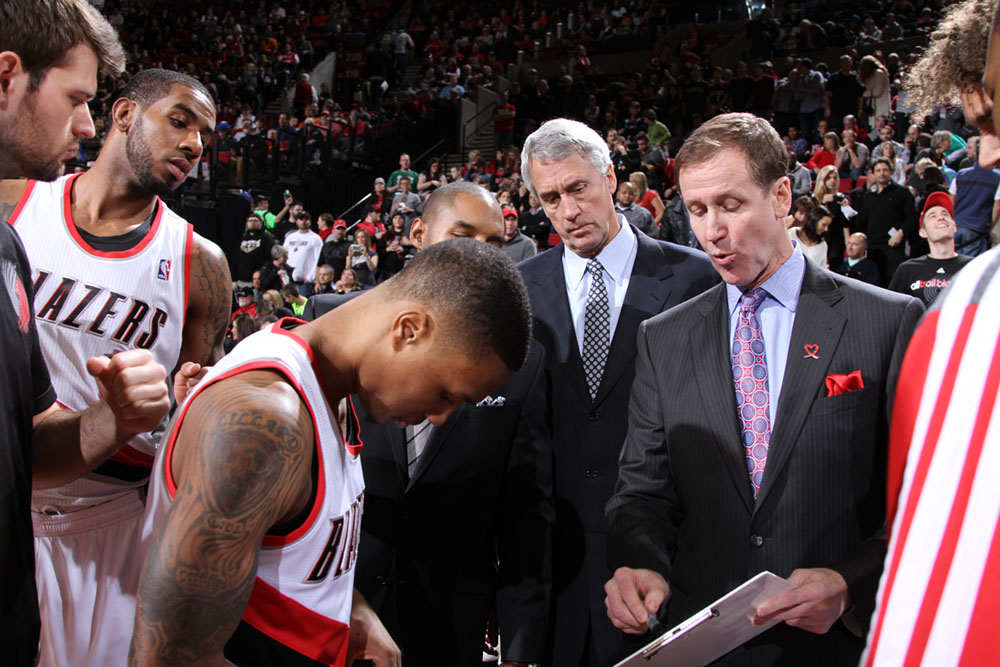 In the spring of 1988, Portland Trail Blazers head coach Terry Stotts was preparing to accept a job offer from Upjohn pharmaceuticals. He’d spent the eight years since graduating from the University of Oklahoma bouncing around the basketball world: cut after three months from a professional team in Italy; three seasons playing for George Karl in the Continental Basketball Association; a season in Spain; two seasons in France wrapped around years earning an MBA degree back in Oklahoma. When Upjohn called, he was 30 years old and hadn’t played professionally for a year and a half. The job offer came on a Wednesday, and he planned to accept by Friday.

On Thursday, two different French teams called. Stotts wasn’t expecting them, but after he and his wife had each finished graduate school, he figured the money in France would provide stability until he could come back stateside and put his MBA to work. “Honestly,” said Stotts this month, days after being named NBA Western Conference coach of the month for November, “if I had gotten that call a week later, I would have said no.”

So he went back to France, where one season turned into a second before it was time once again to contemplate retirement. He made two calls this time: one to a paper company in Boston where a friend worked, and one to George Karl, who coached Stotts during his CBA days in Great Falls, Mont., and with whom he’d stayed close. Karl was in Madrid, but like Stotts, had no clear destination for the following season. Says Stotts: “I called George and I said ‘I’m going to retire, I’d really like to be your assistant next year … wherever it is.’ And he said OK.”

It was the second time that basketball narrowly edged out the business world, and although he would never lack for hoops employment again, Stotts’ coaching career has been every bit as itinerant as his playing days. Now in his third NBA head-coaching job, Stotts, 56, has worked for nine teams in the past 23 years, including two in the CBA with Karl. That a twice-fired journeyman head coach would come to lead the Trail Blazers, fresh off a 33-win season, to a tie for the league’s best record may be — is — a surprise, but Stotts has a way of making even the exceptional seem mundane.

He speaks in lists, modifying his clauses one after the other, his tone the same following a 13th straight loss as it is after an 11th straight win, both of which the Blazers have experienced in Stotts’ year-plus in Portland. He is one of the league’s lowest-variance personalities, coaching one of its highest-variance teams.

On the court Stotts’ influences are clear. He is quick to credit Karl not only with providing him a toehold on the NBA coaching ladder, but with helping him establish a fluid approach to offensive basketball. “Particularly on offense,” says Stotts, “giving players freedom to play, that’s one of the things he’s given me.”

Stotts speaks of Rick Carlisle, with whom he won a title as an assistant in Dallas, in similar terms. Both coaches, it’s clear, have influenced his coaching philosophy, but perhaps the biggest influence on his approach is his time spent working his way from basketball’s periphery to the bench of the NBA’s winningest team.

The word that I always come back to is pragmatism. When I recently met him at the Blazers’ practice facility to ask about his background, he’d already typed out the chronology of his coaching and playing stops — it’d be easier to refer to the sheet than for me to try to piece it together in transcription. But when applied to his coaching philosophy, that pragmatism reveals itself, on a deeper level, to be an almost jarring lack of ego. When I asked him whether he has, over the course of his career, developed a definitive Stotts style of hoop, his response was telling:

“In college, you know, it’s more of a coaches’ game. You recruit to a system, and players come and go. You know an Izzo team, you know a Krzyzewski team, you know a Bob Knight team. I think it’s very difficult to have that in the NBA. You’ve had it with

[Gregg] Popovich, you’ve had it with [Pat] Riley, you’ve had it with [Jerry] Sloan … but I think those are the exceptions. If a coach can put his imprint on the team, that says to me that you’re coaching the team in the way that fits them. … When players get to this level, I think you can tweak their game, but you’re not going to overhaul their game. They got to the league for a reason, they have a certain skill set. They have, already, a talent level and strengths you need to accentuate, and they can build on that.”

As is probably true of most winning teams, the word “chemistry” floats around the Blazers’ locker room this season — LaMarcus Aldridge cites chemistry as the reason he’s happier than he’s ever been, visiting writers are struck by the apparent chemistry. Chemistry is the cliché process by which the clichéd whole becomes more than the sum of its clichéd parts. And yet, Stotts’ approach to his players’ strengths is to produce conditions designed to extract those strengths. If other coaches hammer their players into useful objects or redirect their forces toward more productive ends, then Stotts’ approach seems closest to mixing players whose reaction is the product.

Late in our conversation, I asked Stotts what he liked to do to decompress, whether he had any hobbies. “One of my problems,” he said, “is I don’t have a lot of hobbies. My wife is dying for me to have some. She’s worried when I retire I’ll have no hobbies.” It’s not for lack of enjoyment, he said, but that he’d prefer not to commit himself to something he couldn’t excel at.

“A lot of people really dive into something, really get consumed with it, and I don’t know if I necessarily want to do that,” he added. “It’s a lot of time and commitment to really get good at something. Like playing golf — I could go out and work my ass off to be a good golfer, and what’s the difference between shooting an 82 and an 85?

What it took, in addition to his high school and college years, was 11 professional seasons in four different countries, with stretches of uncertainty and unemployment. Stotts has been coaching now, in some capacity, for 23 years, which is how long it’s taken him to lead an NBA team that could conceivably be called a contender. He knows how long it takes to get good, and now that he’s closer to great than he’s ever been, he knows better than most how rare that really is.