Naming rights to baseball stadiums fetch a lot of money these days. 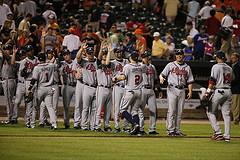 How much could the Atlanta Braves get for the naming rights to their new stadium, scheduled to open in time for the 2017 MLB season? The answer to that question will largely determine how much Liberty Media LMCA -0.29%, who owns the baseball team, will have to come up with for their share of the new stadium’s cost.

According to the Atlanta Journal Constitution, the deal to move the Atlanta Braves to Cobb County involves $450 million in financing by the county and another $200 million put up front by the baseball team. Even though the NFL’s Atlanta Falcons are also looking to sell the naming rights to a new stadium that will debut in 2017, the Braves should be able to get at least $10 million over 20 years for naming rights.

Depending on exactly when the Braves will get the proceeds from selling the naming rights, and when the team will begin to pay their $200 million contribution, Liberty Media might not have to come up with a dime for its new stadium.