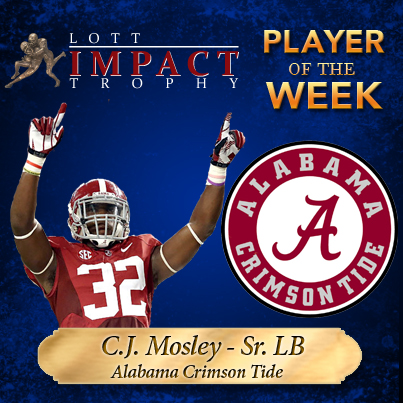 NEWPORT BEACH, Ca. – Alabama Linebacker C.J. Mosley has been named the Lott IMPACT Player of the Week. The 6-2, 238-pound senior from Mobile, Alabama had a dominating game against LSU Saturday, recording a team high 12 tackles (one and a half for losses) and breaking up two passes in an impressive 38-17 win for the No. 1 ranked and undefeated (9-0) Tide.

The Pacific Club IMPACT Foundation will make a donation of $1,000 to the general scholarship fund at Alabama to recognize Mosley’s achievement.

Mosley is one of 20 quarter-finalists for the annual Lott IMPACT Trophy, which will be presented Dec. 8 in Newport Beach, Ca.  The Lott award is the only major college award based on character.  IMPACT stands for Integrity, Maturity, Performance, Academics and Tenacity.

“He’s like the captain of the ship,” defensive end Jeoffery Pagan told Sports Illustrated. “He comes out there. He gets the call. He relays it to everyone else. He controls everything.”

For the season, the returning All-American leads Alabama with 71 tackles, including seven tackles for losses.

2013 Lott IMPACT Players of the Week

Derron Smith (S, Fresno State): Intercepted his 5th pass of season and returned in 36 yards also had a tackle for loss in win over Wyoming, 38-10.