HallPass Media is proud to announce the release of the official Lott IMPACT Trophy mobile app.

Available on both the iOS and Android platforms, the app is the perfect mobile companion to stay up to date on all 42 members of the Lott IMPACT Trophy watch-list, as well as all news and announcements surrounding the Trophy.

“We are very excited about the release of this powerful new App,” said Albert Hall, CEO of The Lott IMPACT Trophy brand. “All of the 42 candidates on the watch-list have incredibly inspiring stories. Now you can read about them on your favorite mobile devices, participate in weekly voting and engage fans across the entire landscape of College Football. The app is another example of how we are continuing to grow the Lott IMPACT Trophy platform and grow our partnerships.”

The Lott IMPACT Trophy app is available now for download on the App Store for iOS devices, including the iPhone®, iPad® and iPod touch®, as well as the Google Play Store and for AndroidTM devices. 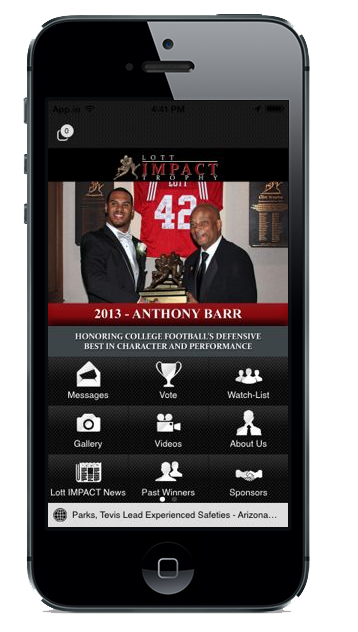