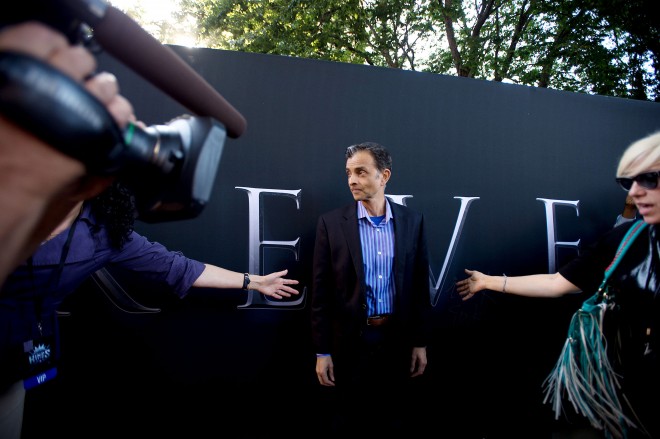 The crowd packed Cesar Chavez Plaza in downtown Sacramento to celebrate Ranadive’s $534 million acquisition of the team and his promise to keep it in town for at least 35 years. The words “Long Live the Kings” filled a huge video screen behind him. Many in the audience held phones aloft, snapping pictures and sending tweets. The hash tag #LLTKRally was trending hard.

Few in the crowd probably recognized Ranadive as the man who digitized Wall Street in the 1980s, or knew he wants to do the same with a franchise in disarray. His ambitious plan to use technology and data to reboot the Kings also could remake the league. He calls it NBA 3.0, a complete rethinking of how fans interact with and follow the game, especially in the developing world.

“We have an opportunity to make basketball the premier sport of the 21st century,” Ranadive says. “Kind of like what soccer was in the 20th century. With technology you can expand social networks, you can give people an opportunity to participate and identify with it in ways that haven’t been done before.”

Ranadive is seen by fans, whose beloved Kings haven’t made the playoffs in seven years, as a savior of sorts. The mayor personally introduced him as the crowd chanted Sac-ra-men-to! and raised a deafening din with cowbells and cheers. One fan told reporters Ranadive’s arrival in Sacramento was bigger than The Beatles’ arrival in America.

This underscores the strength of a fan base so passionate that it set a Guinness record for crowd noise three times in a single game last month, topping out at 126 decibels. These people love the Kings, and they expect big things from the team’s new owner.

So it is perhaps ironic that the man they’re counting on hadn’t even touched a basketball until 2009, when he decided to coach a team of players with almost as little experience with the game as him. But what Ranadive didn’t know about basketball he made up for with data, relying upon mathematics, an algorithm and probability. By his analysis, the team shouldn’t waste time practicing dribbling, passing or even shooting. It should focus on defense and get the other team to turn the ball over. It worked. The team won every regular season game before falling in the state championship. Ranadive was hooked.

“When I look at the business of basketball, it’s more than basketball,” he says. “It’s really a social network. You can use technology to capture that network, expand it, engage it, and then, obviously, to monetize it.”

Ranadive knows a thing or two about technology, networks and monetization. In 1986 he launched Teknekron Software Systems, where he developed “the Information Bus.” His software delivered consolidated information quickly and with low latency, helping lead a digital revolution on Wall Street. He sold the company to Reuters for $125 million in 1994. From there he founded TIBCO Software in 1997, applying technology developed at Teknekron to other industries – including sports. Within its first year, TIBCO’s customers included Yahoo!, Lycos, and CBS Sportsline. The partnership with CBS allowed TIBCO to gather scores and breaking news and feed them into online scoreboards and news sites. It also provided multimedia applications, using the data to create real-time simulations that could be watched online.

In May, an ownership group led by Ranadive bought the Kings in a deal worth $534 million – the league’s biggest ever. Ranadive, the first Indian-born majority owner of an NBA franchise, believes that’s a fraction of what the franchise will eventually be worth. He’s wasted no time implementing his plan. He had TIBCO build an app for the team. It includes a tab for Royal Circle, a social media network specifically for Sacramento fans. Interacting with the team digitally earns points that can be redeemed for tickets and Kings’ merch. Ranadive believes this “loyalty science” puts the Kings above others who have tried to use social media to engage fans.

“We are the only people to have actually created the science of understanding what it takes to provide the right psychological experience,” he says. “We know the action to take to convert sentiment into intention and then intention into action. That’s key to turning customers into fans.”

This effort goes beyond social media. This expansive network recognizes when a fan enters Sleep Train Arena and begins making real-time, location-based offers. Want a Kings’ cap? The app can tell you they’re on sale. Thirsty? Order a beer with your phone and have it sent to your seat. Gotta go? The network can tell you which restroom has the shortest line. Fans need not be in the arena to enjoy the benefits of all this technology. A fan watching the game in Mumbai can just as easily win a T-shirt as the guy sitting courtside.

This all-knowing network – it includes high-speed messaging, real-time event processing engines and cameras everywhere — sifts terabytes of data for trends and patterns. “There’s so much data that’s created,” Ranadive says. “Whether it’s picking up a tweet, or picking up a like. The same software that we use to find cures for cancer, we’re going to use to provide our guests the ultimate fan experience.”

Ranadive isn’t new to this. In 2010, when he was a minority owner of the Golden State Warriors, he built a similar social network designed to reach fans worldwide. He has said, “The network isn’t the 20,000 fans in the arena, but the 500,000 outside.” The Warriors’ network included fans in more than 3,000 cities in more than 100 countries.

That’s the ultimate play here. Ranadive isn’t interested in making the Kings popular in Sacramento, or California, or even the United States. He wants them popular everywhere. Ranadive is convinced the team’s – and the league’s – greatest growth lies abroad, particularly in India, and that technology will drive it. To that end, the Kings have broadcast games on Indian television and launched a team website with content written entirely in Hindi. The goal is to make the Kings a global brand, much like the Chicago Bulls were under Michael Jordan.

“India is fertile ground,” says Sam Amick, who covers the NBA for USA Today. “A big part of what he wants to do fits the NBA’s agenda. It fits what they want to do.”

It’s a fascinating proposition, particularly for players. Ranadive’s plan could make players on an otherwise spotty team in a small market wildly popular in countries ravenous for the game. “All of a sudden you’re becoming a global star because millions of people in India know who you are,” Amick says.

Ranadive’s obsession with giving people what they want, when they want it, through their phones is not without detractors. Take, for example, Mark Cuban, owner of the Dallas Mavericks. He firmly believes fans in the stands should not be – and do not want to be — distracted or disturbed.

“The key for any NBA team is not falling into the lookdown trap,” Cuban told WIRED by email. “At the Mavs we want to entertain people enough during breaks that they forget to look at their phones. When people connect to their phones for anything other than an occasional text or email it means we have failed at entertaining our customers.”

Still, the NBA has long been on the forefront of social media and is rushing to adopt new technology. This season, all 30 teams installed SportVU that track every player on the court, creating a wealth of data. The league makes all this information freely available through NBA.com, NBA TV or the NBA Game Time app. “Analytics are a huge thing right now,” Amick says. It’s shaping everything from coaching to marketing. “It’s an inexact science but it’s one that’s evolved really quickly and Vivek clearly has a strong interest in it.”

All of this will be for naught if Ranadive can’t make winners out of a team that is currently 7-16 and living in the Western Conference basement. Here, too, he sees technology as a powerful tool even as he brokers one deal after another for new talent. “We’re going to use pattern recognition technologies to identify patterns on the court,” he says. “What combinations of players produce the best results, how do you guard someone, where’s the optimum spot to shoot from, should you be a foot away from someone, should you be ten inches away, what the trajectory of the ball is, things like that.”

Sacramento fans have long suffered through questionable management decisions, young players led by changing cast of coaches, and threats of relocation. With Ranadive at the helm, there’s a feeling of security, reassurance, and hope. At the very least, he has shown he is dedicated to the cause and has the knowledge and the resources to execute his vision. That has resonated with fans. Ticket sales are up, and the team is slated to move into a $448 million arena in 2016. It’s a stunning turnaround for a team that until earlier this year was poised for a move to Seattle. Now it seems Sacramento is ready to hail its new King.