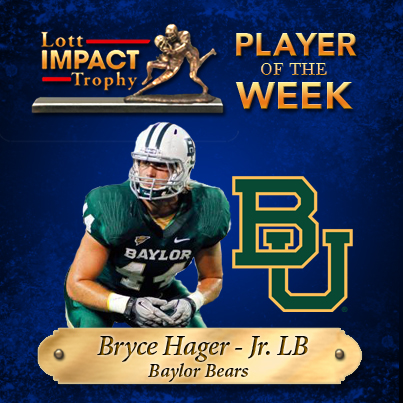 NEWPORT BEACH, Ca. – Baylor Linebacker Bryce Hager has been named the Lott IMPACT Player of the Week. The 6-2, 235-pound junior from Austin, Texas led the Bears with a career high 18 tackles, including two tackles for losses and a sack, in a win over Kansas State, 35-25. Baylor is 5-0 and ranked No. 12 in the country.

In recognition of Hager’s performance, the Pacific Club IMPACT Foundation, sponsors of the Lott IMPACT Trophy, will make a $1,000 donation to the general scholarship fund at Baylor.

Hager has been on the Big-12 Commissioner’s Honor Roll and was an All Big-12 selection a year ago when he had 124 tackles. Earlier this season, he returned a fumble 91 yards for a touchdown against Buffalo.His father, Britt, was the All-American and the all-time leading tackler at Texas. Quarter-finalists for the Lott IMPACT Trophy will be announced Oct. 23.

Chris Borland (Wisconsin, LB): Led Badgers with 10 tackles, one sack, a quarterback hurry and a pass break up in win over Northwestern, 35-6. Northwestern was held to 241 total yards.

Ibraheim Campbell (Northwestern, DB): Had an interception, a sack, a fumble recovery, a pass break up and 9 tackles in loss to Wisconsin, 35-6.

Spencer Shuey (Clemson, LB): Led team with 9 tackles, 2 for losses and broke up one pass in 24-14 win over Boston College.

Spencer Shuey (Clemson, LB): Led team with 9 tackles, 2 for losses and broke up one pass in 24-14 win over Boston College.