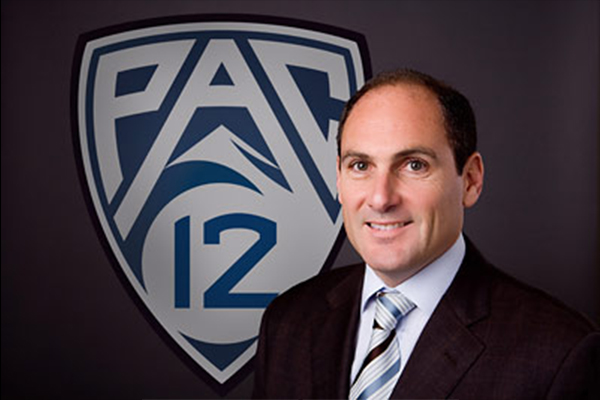 NEWPORT BEACH, Aug. 14 – Larry Scott, the innovative and highly acclaimed commissioner of the Pac-12. will be the keynote speaker at the Tenth Annual Lott IMPACT Trophy banquet Dec. 8.

The announcement was made today by the Pacific Club IMPACT Foundation, sponsors of the annual award.

The Lott IMPACT Trophy goes to the college defensive player who has the biggest IMPACT on his team both on and off the field. IMPACT stands for Integrity, Maturity, Performance, Academics, Community and Tenacity.

Since its inception in 2004, the Pacific Club IMPACT Foundation has donated more than $1 million to various charities throughout the country, including scholarship monies to the universities of the winners and finalists.

“We feel Larry Scott is the perfect speaker for our award,” said John Hamilton, the Chairman of the Board of Directors of the IMPACT Foundation. “He represents one of the great college conferences in America and has overseen it with both vision and compassion.”

Scott became commissioner of the then Pac-10 Conference in July of 2009. He previously had served six years as Chairman and CEO of the Women’s Tennis Assn.

Scott is a former tennis All-American at Harvard where he graduated with a degree in European History where he gained a lifelong appreciation for the importance of maintaining a careful balance between academics and sports.

Named after Pro Football Hall of Fame member, Ronnie Lott, The Lott IMPACT Trophy is awarded to college football’s Defensive IMPACT Player of the Year. Founded in 2004 by The Pacific Club IMPACT Foundation, The Lott Trophy is the first and only college football award to equally recognize athletic performance and the personal character attributes of the player. The Lott Trophy is given to the player who exhibits the same characteristics Lott embodied during his distinguished career: Integrity, Maturity, Performance, Academics, Community and Tenacity. Voters for the award include selected members of the national media, previous finalists, the Board of Directors of the Pacific Club IMPACT Foundation and a distinguished group of former college football head coaches.