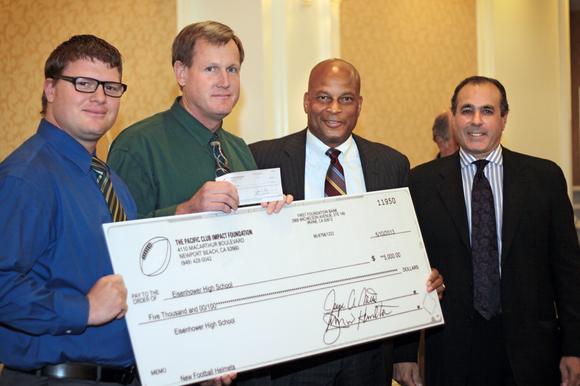 Lott opened an envelope that revealed the recipient of a $5,000 check that put the IMPACT Foundation over the $1 million barrier for money raised for scholarships and donations.

Lott, the Hall of Famer and former NFL star safety, smiled as he made the announcement that his alma mater, Rialto Eisenhower High School, would receive the money.

Lott stood and smiled, along with a big check, standing with Eisenhower football coach Vinny Fazio and the school’s Athletic Director Steven Johnson.

Lott was pleased that over $1 million had been raised within 10 years.

“Let’s see if we can get another million,” Lott told a packed banquet hall.

People were there to hear the good news, as well as to receive the watch list. UCLA’s Anthony Barr and Eric Kendricks, and USC’s Devon Kennard are among the 42 to be named to the watch list for the award that will be announced in December.

Fazio was grateful to receive the $5,000 check that will help a program that captured the Citrus Belt League title in Fazio’s first year this past season. He said the money will be used for helmets.

In the past, Fazio said he had turn away players because there weren’t enough helmets.

“For us, we’re a program that’s in a low-income area,” Fazio said. “We’re in a low-income district, a low-income school. So, for us this is just a huge deal. This just revolutionizes the health and safety for our kids. We’re going to be able to protect our kids and let them to keep on playing.”

Fazio said it was “cool” to be the recipient that put the IMPACT Foundation over the $1 million barrier.

A video was shown at the luncheon that also explained the Lott Trophy.

The late Bill Walsh delivered a reason in simple terms in the video.

Lott and the IMPACT Foundation have been able to do great things since the award began in 2004.

At Eisenhower, Lott is held in high regard. The football stadium is named after him.

Lott is revered among noted NFL players Ryan Clady (Denver Broncos) and Victor Butler (New Orleans Saints), who are also alumni of Eisenhower and have been supportive of the school, Fazio said.

They answered questions from moderator Pete Donovan and touched on subjects ranging from leadership and concussions in football.

Robinson roasted Lott a bit to get some laughs, claiming his former USC All-American was slow. But he spoke about the great character Lott possessed.

“If Ronnie was in a third-world country he would’ve created a revolution,” Robinson said.

Slater talked about the extreme safety and precautions used for concussions in today’s NFL as opposed to his days with the Los Angeles Rams.

Slater said in today’s NFL he would’ve had to come out of the game after receiving a big hit from Lott in the 1989 NFC Championship game. Slater said Lott, after making an interception, chose to go low and hit Slater rather than run out of bounds.

Budde said the safety and precautions might become overwhelming and put an end to the game.

“I enjoyed the violence of the game,” Budde said. “That’s what it’s all about. But the players better watch out now with these concussions. With the stuff with concussions these young men won’t have a job.”

Lott closed the luncheon with encouragement to raise more money for charity.

The IMPACT Foundation took pride in the money raised and the recent history of those who have won the award.

Last year’s Lott Trophy winner was Manti Te’o, who was drafted by the San Diego Chargers in the second round.

Luke Kuechly, the 2011 Lott Trophy winner, was the 2012 NFL Defensive Rookie of the Year.