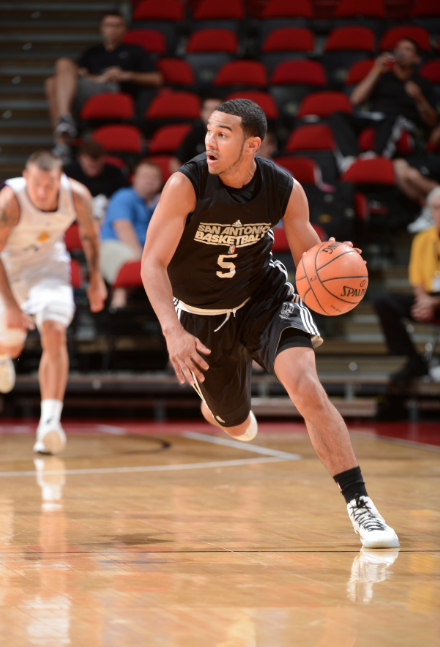 Cory Joseph led the charge in Las Vegas at the 2012 NBA Summer League for the San Antonio Spurs. He also began toÂ prepare for theÂ 2016 RioÂ games with Canada, and on Saturday Joseph showed off his improved game in the Spursâ€™ first preseason win over Montepaschi Siena.

Joseph didnâ€™t play in first half of the game, but he started the second half and made an immediate impact with his defense, and improved outside shooting. Joseph scored 10 points on 4-of-6 shooting, while collecting three steals and passing two assists.

After the game, I caught up with the second year point guard and he told me how the Summer League and his focus on defense are key for his progress this season.

â€œI know in this organization we take pride on defense and I know Pop (Gregg Popovich) kills us about defense.â€ Joseph said, â€œI just go out there and set my mentality on defense and let it create my offensive intensity, thatâ€™s why I try to do it.â€

â€œThe summer league helped me a lot,â€ continued Joseph, â€œthis confidence helped me a whole lot. I spent countless hours in the gym, I feel like I learned a lot.â€

â€œI think obviously it creates tempo, we feel like that helps us a lot. Since thereâ€™s no designated point guard, I think it allows us to be even more versatile.â€

When asked about how huge the corner three is when being a member of the Spurs, Joseph said it can play a major part in increased minutes along with of course, defensive play.

â€œIâ€™ve seen guys make a living shooting the corner three,â€ said Joseph, â€œBruce Bowen was known for that corner three. Me and Chip Engelland have worked on that corner three. Thatâ€™s one of the things, but obviously defense, youâ€™ve always got to play defense.â€