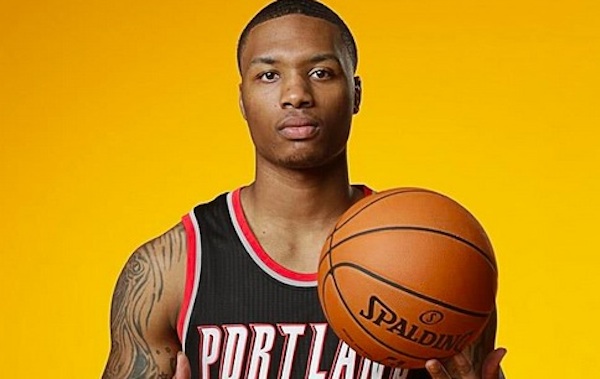 Portland Trailblazers rookie Damian Lillard wasnâ€™t a highly touted high school player coming up in Oakland, Calif., and he didnâ€™t attend a powerhouseÂ NBA-feeder college program like Duke or Kentucky. But the kid. Can. Ball.

Now, as Lillard begins his first season as a professional point guard out of Weber State University,Â social mediaÂ is playing a key role in introducing him to NBA fans. Beefed upÂ TwitterÂ andÂ InstagramÂ presences coupled with an ongoingÂ YouTubeÂ mini-documentary series have helped raise Lillardâ€™s profile among non-hardcore hoops fans in ways that wouldnâ€™t have been possible just several years ago.

Of course, none of that digital promotion would exist if not for Lillardâ€™s big-time game. He was college basketballâ€™s second-leading scorer last year at 24.5 points per game and named co-MVP of the NBAâ€™s annual summer league in July. His impressive summer showing now has him as a trendy darkhorse pick for Rookie of the Year. Still, when the Blazers picked him sixth overall in Juneâ€™s NBA Draft, the move had many casual fans asking, â€œWho?â€

â€œKids who play for Texas or North Carolina in college, all they do during the telecasts is tell you about their backgrounds and how they started playing ball,â€ says Nate Jones, who oversees digital marketing forÂ Goodwin Sports Management, the agency that represents Lillard.

Enter social media. Important for any athlete looking to build a brand, itâ€™s been an extra-powerful factor for Lillard to share his own story and personality, which werenâ€™t featured on those national telecasts.

Lillardâ€™s social push actually began before the draft, when increased attention as his buzz built boosted his Twitter follower count by thousands. He now interacts regularly with hisÂ 46,000 followersÂ (he had some 2,000 early this summer) and is active onÂ FacebookÂ and Instagram (username: DamianLillard) as well.

But the biggest piece has been â€œLicense to Lillard,â€ a series of YouTube mini-documentaries that fill fans in on his background â€” he learned to shoot on a tree and goes through epically grueling workouts â€” as well as showcase his work ethic and personality.

â€œTo me, marketing is just storytelling,â€ says Jones, whoâ€™s helped produce mini-docs for a number of other Goodwin clients in the past. â€œMini-docs are a way for you to build that strong tie between fans and a player, and that relationship is the most valuable thing a player has going for them.â€

The videos have become hits with fans, with the recently released third installment picking upÂ about 25,000 viewsÂ in its first three days online.

The Blazers have been featuring Lillard digitally, too â€” as they would any first round pick, but also with an eye toward his low-profile past, according to Dan Harbison, the franchiseâ€™s director of digital media andÂ marketing. A steady stream of highlights shared via Twitter and a recent YouTube profile have been part of that effort.

â€œWith Damian specifically, we definitely needed to make sure we connect him to the fans, not just because heâ€™s new, but because he wasnâ€™t on the radar as much as other guys,â€ Harbison toldÂ Mashable.

Lillard gets his NBA career officially underway with the Blazersâ€™ season opener on Oct. 31. If he has the strong year so many now expect and picks up more endorsement and media opportunities, donâ€™t forget where you may have gotten to know him first â€” the social web.