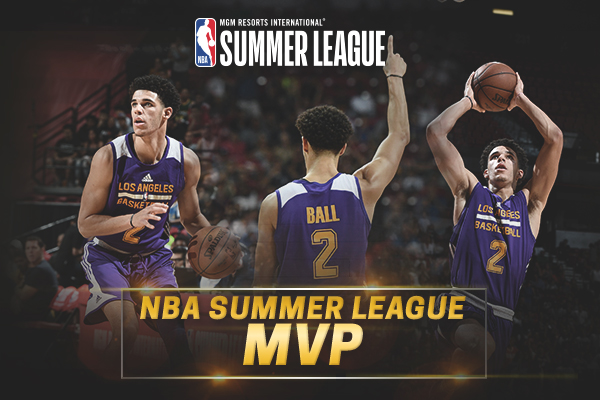 Ball, the first Laker to be named NBA Summer League MVP, averaged 16.3 points and a league-leading 9.3 assists to go with 7.7 rebounds and 2.5 steals. He recorded two triple-doubles, including the first in Las Vegas since 2008, when he contributed 11 points, 11 rebounds and 11 assists in an 86-81 loss to the Boston Celtics on July 8. On July 13, he tallied a triple-double of 16 points, 12 assists and 10 rebounds in a 94-83 victory over the Cleveland Cavaliers.

The Lakers enter tonight’s Championship Game with a 5-2 record. Ball will not play due to a calf strain.

MGM Resorts NBA Summer League 2017 featured a tournament-style format for the fifth consecutive summer. The Golden State Warriors won the inaugural championship in 2013, followed by the Sacramento Kings in 2014, the Spurs in 2015 and the Chicago Bulls in 2016. Each team at this year’s competition played three games from July 7-11 before being seeded in the tournament, which tipped off on July 12.

The MGM Resorts All-NBA Summer League Teams 2017 are below.