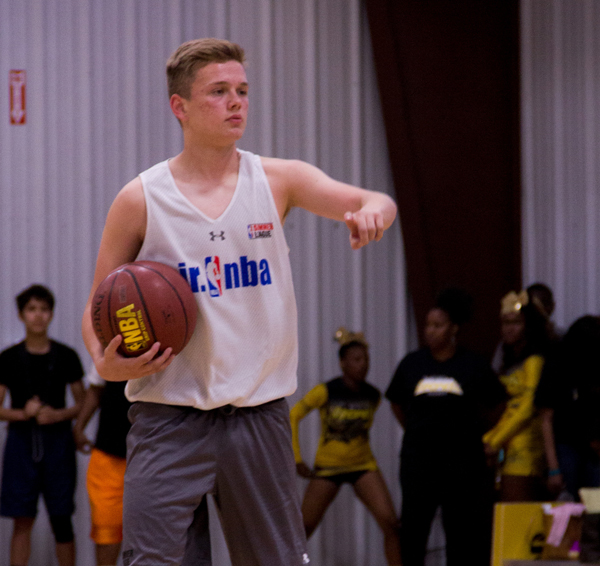 Students were selected to participate through nominations from school coaches and administrators and all players must meet and maintain grade and conduct requirements.

Students participated in a player evaluation tryout where over 200 boys and girls competed and finalists were selected to fill 16 teams.  Game play will commence on April 21st and all games will be played on Friday evenings.  Clark County Commissioner Chair Steve Sisolak will be present to perform the honorary ball toss and the welcoming of the new league to Las Vegas.  “The NBA Summer League has been an exciting addition to the community for over thirteen years and I’m excited to welcome the Summer League Jr. NBA to Clark County as well. This is a great opportunity for kids in our community to participate,” said Sisolak.  Game play will culminate with the playoff and championship rounds in June.

The boys and girls championship teams will be honored during a halftime at the NBA Summer League taking place from July 7-17th at Thomas & Mack Center and Cox Pavilion.

As a way of giving back to the community for its many years of support the NBA Summer League will underwrite all cost for student-athletes to participate.

The players who attended the tryout but were not selected for the spring league will be invited to attend an elite basketball clinic hosted by Summer League Jr. NBA.  Players will also be given tickets to attend the NBA Summer League Championship game on July 17th at the Thomas & Mack Center.

NBA Summer League continues to give back to the Las Vegas community since its inception in 2004.  Summer League Jr. NBA is an example of the community contributions over the years such as Hoops for St. Jude, Military Appreciation Night, Dr. Martin Luther King, Jr. Day Parade, Adopt A School, Noche Latina, and the holiday food drive.  The goal of Summer League Jr. NBA is to assist the youth throughout Southern Nevada and to provide them with healthy programming focused on leadership, sportsmanship, and accountability while instilling positive core values.  “The Las Vegas community has supported us from the start and we truly feel that Summer League is part of the city.  Founding this league with games on Friday nights will create a positive environment for students, parents, and coaches across Southern Nevada,” said Albert Hall, Vice President of NBA Summer League.