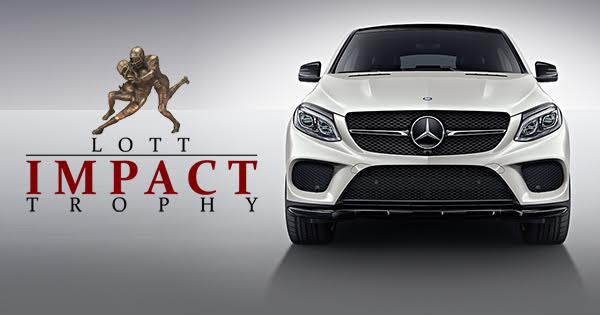 Named after 4-time Super Bowl winner and Pro Football Hall of Famer Ronnie Lott, the Lott IMPACT Trophy recognizes young men who not only perform on the field, but also off the field. The award celebrates defensive college football players that embody the IMPACT acronym; Integrity, Maturity, Performance, Academics, Community and Tenacity.

“Mercedes-Benz USA is proud to be a sponsor of the Lott IMPACT Trophy for the third consecutive season. Our sponsorship of the Lott IMPACT Trophy has grown from year to year and it is a rewarding experience to be a part of a program that celebrates the same core values our brand – the best or nothing” said Bob Yeatman, General Manager, Mercedes-Benz Western Region. “We are looking forward to another great season of college football and watching all of the candidates make an IMPACT both on the field and in their communities.”

A Look Back at the 2014 Lott IMPACT Trophy