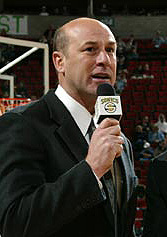 FORMER VOICE OF SONICS KEVIN CALABRO ON THE POTENTIAL RETURN OF A TEAM TO SEATTLE
January 8, 2013