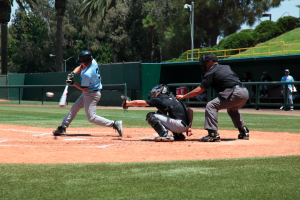 Game 2 of the 2011 Elite Baseball Series at UCLA displayed outstanding defense and finesse pitching. Although several players stood out amongst the rest, only two earned Elite Players of the Game honors. For the Blue team, nominations were earned by #24Â Nick Kern (INF/RHP) from Brea Olindo HS and #30Â Kyle Johnson (RHP/OF) of Torrey Pines HS.Â Nick Kern went 1 for 2 with a walk, stolen base and a bases clearing triple.Â Kyle Johnson was the winning pitcher of the game for hurling 3 scoreless innings and only allowing 1 hit while striking out 2 batters. Defensive highlights include: a great diving catch in left field by #19 Jameil Robinson, a spectacular diving grab by #16 Kevin Viers at third base to turn a double play, a beautiful backhanded play up the middle by #18 Dominic Nunez at second base and another tough backhanded play deep in the hole at shortstop by #21 Nick Osuna. Offensive highlights include: #18 Dominic Nunez going 2 for 2 with a walk, single, double and RBI; #39 Gavin Collins was 1 for 1 with a walk, stolen base, single and a sac-fly RBI; and #12 Dan James with a double off the wall followed by a rally starting run scored. The final score of Game 2 was 7-1 with the Blue team victorious over the Black team.

Congratulations toÂ Nick Kern andÂ Kyle Johnson for being nominated as the Elite Baseball Series Game 2 Players of the Game. Stay tuned for more strong displays from our players this afternoon, July 31st at 1pm in the final game of the 2011 EBS.