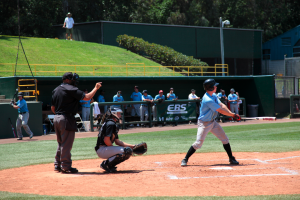 The 4th annual Elite Baseball Series at UCLAâ€™s Jackie Robinson Stadium featured 40 of the top high school athletes in the country. It truly was a beautiful day for baseball on Friday and the talent did not disappoint. A total of 25 runs were scored in this 9 inning slugfest, but three players elevated above the rest. The Elite Baseball Players of the Game for the Blue Team were: #19Â Jameil Robinson (OF) from Serra HS, #18Â Dominic Nunez (INF) of Elk Grove HS and #3Â Aaron Barnett (C/OF) out of Capo Valley HS. As the lead-off batter for the Blue team,Â Robinson went 2 for 2 on the day with 2 singles, 2 walks, 2 sacrifice fly RBIâ€™s and 2 runs scored. Hitting in the three-spot,Â Nunez was 2 for 4 with a walk, a single, a double, 2 runs scored and 3 RBIâ€™s. From the six-hole,Â Aaron Barnett went 3 for 4 with 3 singles and 3 runs scored. Other notable performances for the Blue squad include: #16 Kevin Viers from Esperanza HS who drove in 3 runs, #24 Nick Kern of Brea Olindo HS who blasted a 3 run Home-Run, #39 Gavin Collins out of El Toro HS went 3 for 5 with a double and 2 RBIâ€™s. For the Black team, #39 Ryan McMahon from Mater Dei HS was 2 for 3 with a single, double and pair of RBIâ€™s. The final score of Game 1 here at UCLA was 15-10 in favor of the Blue team.

Congratulations toÂ Jameil Robinson,Â Dominic Nunez andÂ Aaron Barnett for their outstanding performances at Game 1 of the 2011 EBS at Steele Field at UCLA. Stay tuned in this weekend for live action updates, photos and scores. Game 2 begins July 30th at 1pm followed by the final game of the series, July 31st at 1pm. 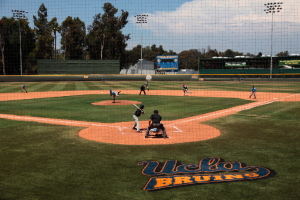