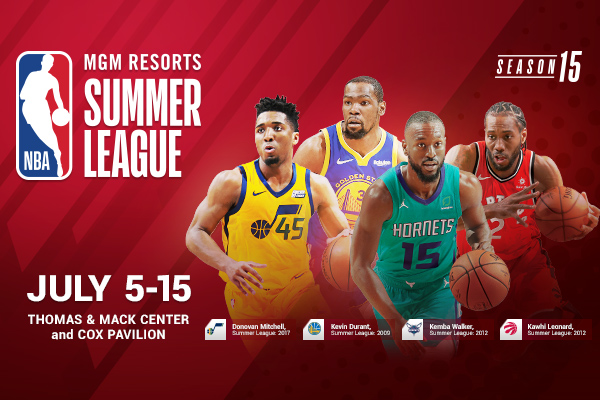 NEW YORK, March 20, 2019 – The NBA announced today that the Chinese and Croatian National Teams will join all 30 NBA teams to compete at MGM Resorts NBA Summer League 2019, marking the first time that the league will feature two international teams. The 15th NBA Summer League will take place July 5-15 at the Thomas & Mack Center and Cox Pavilion on the campus of the University of Nevada, Las Vegas.

MGM Resorts NBA Summer League 2019 will be an 11-day, 83-game competition that opens with all 32 teams playing four preliminary games each. The top eight teams are then seeded in a tournament, which culminates with a Championship Game on July 15. Teams that do not qualify for the tournament will each play a consolation game. Every team will play at least five games and as many as seven at NBA Summer League.

Last year, all 30 NBA teams participated at MGM Resorts NBA Summer League for the first time. NBA Summer League 2018 set a record for total attendance (139,972) for the second consecutive year and matched the single-day attendance record (17,500), which was established in 2017.

The 2018 event was the most-watched NBA Summer League ever, with ESPN and NBA TV combining to amass 30.4 million hours viewed. Fans across social media platforms accounted for more than 565 million video views, an increase of 35 percent from the previous year.

Ticket information and complete game and broadcast schedules for MGM Resorts NBA Summer League 2019 will be announced at a later date.