For the 35th year in a row Las Vegas hosted its “Living the Dream” parade to honor Dr. Martin Luther King, Jr.  As a prominent member of the Las Vegas community for the last 13 years, the NBA Summer League was well represented at this years parade.  Representing the theme “Delivering Dreams Since 2004,” 2 trucks were decorated with NBA Summer League branding and over 100 Summer League community members took part in the celebration.  Some of the community partners participating were Clark County Commissioner Steve Sisolak, the Tarkanian Basketball Academy, Findlay Toyota, BDJ Foundation (coming from LAX), the Summer League ball crew and team assistants, Jonathan Scott of NBC Sports Radio, as well as Las Vegas entertainers Sham Lewis and Toscha Comeaux. 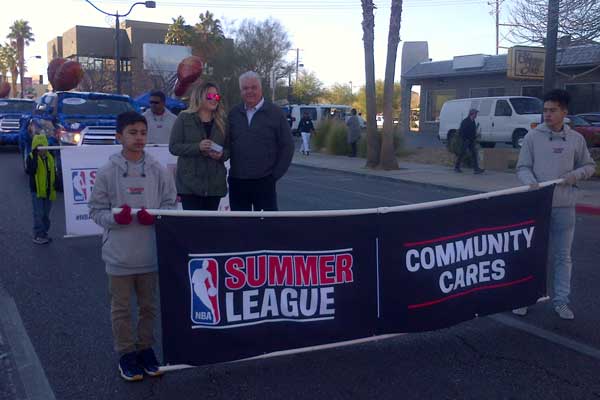 It was estimated that the crowd along the parade route was over 12,000, making it the largest MLK parade west of the Mississippi.  The parade was founded by former state assemblyman Wendell Williams.  The CCSD school named after him, Wendell Williams Elementary School, is one of the NBA Summer League’s Community Care partners adopted for the 2017 school year. Western High School, who’s marching band played with the NBA Summer League trucks in the parade is also an adopted Community Care partner this year.