NEWPORT BEACH, May 16—The 2013 Lott IMPACT Trophy Watch List was announced today at a luncheon at the Pacific Club in Newport Beach.

The 42 student-athletes from 37 different colleges around the country represent players who have made the biggest IMPACT on their teams both on and off the field. IMPACT stands for Integrity, Maturity, Performance, Academics, Community and Tenacity.

Voting for the award is held throughout the season by a National Voter Panel of former college coaches and players, select members of the media, past winners of the award and the Board of Directors of the Pacific Club IMPACT Foundation, the sponsors of the award.

There are four players who are repeat nominees from the 2012 Watch List – Linebacker Aaron Barr of UCLA, Linebacker Chris Borland of Wisconsin, Linebacker Max Bullough of Michigan State and defensive end Jackson Jeffcoat of Texas.

Northwestern, Ohio State, Stanford, UCLA and Virginia Tech each have two players on the list.

There are 20 linebackers, 14 defensive backs and eight defensive linemen on the list.

The Pacific Club IMPACT Foundation also announced charity donations of $25,000 which brought their total donations in nine years to over $1 million.

The 10th annual Lott IMPACT Trophy Black-Tie Awards Banquet will be Dec. 8 at the Pacific Club in Newport Beach. 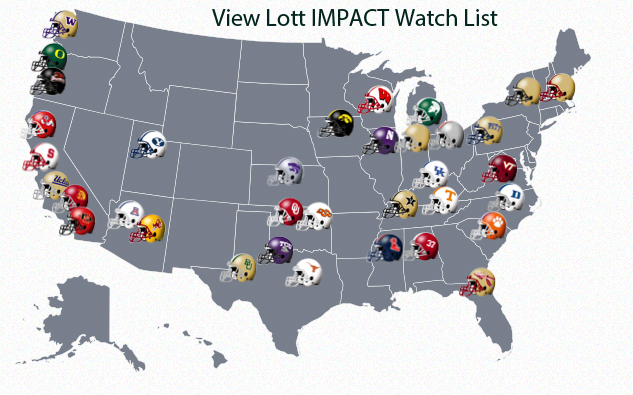